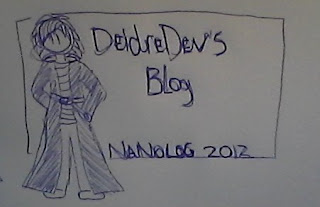 To start things off, the above picture is a doodle that I made about three minutes ago of myself. I drew it with a blue pen, so I didn't shade in skin complexion or anything of the like, besides the trench coat and my hair. I really love cartooning, and this sketch is one of my best yet! (My hair in the pic is pinned up with a clip, which is how it looks like when I can't find a hairtie to pull it into a bun.) 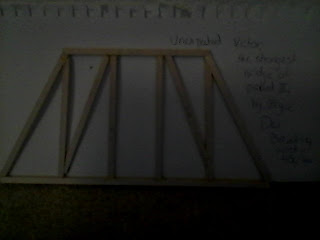 This half of a bridge that you see above is what might have gotten me an A on my tech ed project this week. The challenge was to build a bridge about five inches tall and ten inches wide, using 4.5 sticks of 13.5 inches for each side. My partner was a very smart boy named Bryce, and we worked with my TI-84  Plus calculator and started working on it. As a rule, I'm not an expert craftsman, and have only had a few months experience in the woodshop, a bit less than everyone else. However, that didn't let me down - Bryce and I spent the next week measuring, cutting, sanding, filing, gluing, chiseling, and clamping our bridge together. In the end, it was a pretty nice lopsided mess. We had only glued the center beams the day before testing, and one of them was loose before there was any weight put on it. However, this was a good chance to laugh and smile, so I fetched a stool and recorded the entire class's weigh-ins with my phone. I can't post any because of faces in it, but it was a blast - people were betting on which bridge was the strongest (guess who was in last that day) and how much each one would hold (our best guess was 130 lbs).
I think Bryce and I were the sixth in line. I kneeled on the stool next to my friend Arianna, and we giggled as each bridge got weighed, put pressure on, and broke apart after a series of satisfying crackles from the glue. It was funny until it was our turn.
"Go, Bryce, go!" One classmate chanted, jeering as our bridge was placed on the tester.
"Good job, Dei, three pounds and counting!" I giggled and waited for the cracks. There were none. The crowd went silent.
One hundred pounds. "It's still going!" Cried someone in the crowd.
"Oh my, God!" I nearly screeched. Our bridge was still in one piece, and only little crackles were being made. I knew that getting my hands all gluey was worth it.
Two hundred.
Three. Three-fifty. Bryce stared at me, gaping, then back at the bridge.
"Oh my, God!!" I yelled into my phone as the crowd grew louder.
Four-twenty.
"We have a new record!"
Four-thirty, four forty-five. A sickening crack resounded, and I saw a freshly glued beam fall out of place.
"Everybody stand back." The teacher said calmly. I kept my phone up but ducked on my stool, as he added five more pounds, and the bridge split.

In conclusion, nobody beat 450 lbs in the third period. Bryce and I hurried back to our seats and glued the beam back on, hooting and hollering at our victory. I took half of the bridge home, and named it Unexpected Victor, after my calculator (and its unexpected knowledge) and our win.

Check back soon for the beginning of NaNoWriMo!

Why must we live in the past, when we are the future?